Why You Should Get to Know Your Business Neighbors 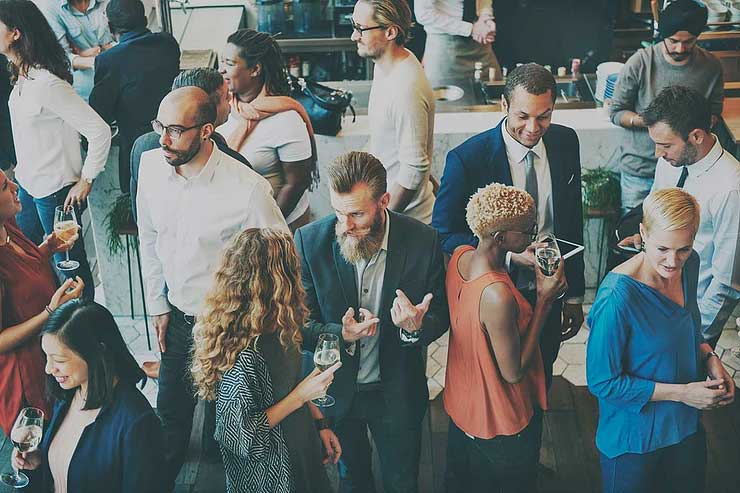 The following article originally appeared in the March 2017 edition of Downtown Promotion Reporter, a publication of the Downtown Development Center. The DDC provides a forum for exchanging news, information and ideas on how to rebuild the hearts of our cities and towns.

Meeting locations are rotated among merchants willing to host. Coffee is always provided by the hosting business, and “some go above and beyond,” says Colleen Paveg­ lio, the DDA’s marketing and deputy director. September’s host, for example, provided “a European breakfast that was beautiful.”

“Meetings were always held at a bookstore, but about five years ago we decided to rotate,” says Paveglio. “They are usually at a restaurant, or at a store with seating to accommodate that type of group, or at a theater, which shows off new performance venues.”

Board members from the merchant’s association are encouraged to attend the 8:15 a.m. meetings so that downtown business owners have an opportunity for contact with their rep­resentatives. Meetings are open to the public, but are geared toward the business community, says Paveglio. Meetings always end by 10 a.m. so that business owners can get back to their establishments by opening time. “This is a great way to communicate with the merchants,” she says. “Everydowntown organization wants to have that contact with their merchants, and sometimes that takes walking up and down the street, but that’s hard to do all the time.”

Meetings draw from 20 to 30 business owners, “but that’s still worthwhile to do, because the merchants are involved and talk­ing to their neighbors,” Paveglio says. Each event includes social time for networking. “We try to make the programming worthwhile, but we are very careful about not having [presenters] ask for money or make a sales pitch. The October theme was ‘Your Presence on the Web’ and we had companies there with various apps, but it was not a sales pitch. It’s a fine line sometimes. And at every meeting, we update them about what the DDA is doing, project updates about public improvements and as far as special events we are running in which merchants can partake.”

Another benefit is that attendees learn about each other’s businesses, which paves the way for cross-promotion and collaboration.

“It creates opportunities for merchants to get to know one another,” she says. “Recently, they were talking about business hours. We explained that this is an issue in every downtown, which is not a mall, but a group of independent business owners who all have different hours of operation. So they were all dis­ cussing what their hours were, and what they were going to do on Sunday, and bouncing ideas off each other. It’s great to get them all in a room. It creates an opportunity for them to collaborate a little bit and have some ways of working together, whether it be downtown events or some kind of program.”

The December meeting always focuses on upcoming holiday programming, including the annual arrival of Santa Claus, open houses, and annual Men’s and Ladies’ night out sales events. “There’s a lot of chatter back and forth about what people do on those nights,” says Paveglio. “Some people serve alcohol, some do wine tastings because we do have winer­ies around here. One time, a merchant said, ‘I don’t want to serve alcohol, but if somebody buys $50 worth of merchandise, I will send them to the pub for a free drink.’ That was a great idea and has worked out really well.”

Meeting dates and programs are pushed out to merchants via the DDA newsletter and emails. “It’s not always easy to have that one-on-one time or to communicate with merchants,” says Paveglio. “Sometimes I am chained to my desk. We wish we could do more. Sometimes Rob [Bacigalupi, executive director] and I will do walking meetings so that we can see people. But Good Morning Downtown provides another way to have that contact with our constituents. If other down town organizations want to create another avenue, to have a good community tool, I would say give this a try. Offer free coffee and a chance for merchants to meet their neighbors. There is not a lot of time required to put it on.”